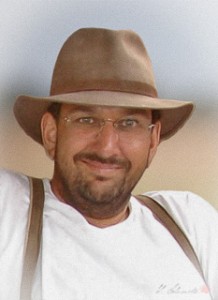 Michael Schmitz, born in 1964, is an internationally recognized prospector of precious metals and stones, an author and a photographer.

“I believe I inherited the gold fever from my father, who used to mine gold in Mexico and Venezuela. When I was a child he would tell me a bedtime story about it every night. Almost certainly that is one reason why I became a gold prospector too.

Raised on the southern shores of the Baltic Sea, when I was young I would spend hours snorkeling for crabs in the summer and observing in awe the last seahorses in the seagrass meadows in front of the cliffs of the Bay of Lübeck, close to my parent’s home in Travemünde. So I developed a deep passion and fascination for the natural world.

After schooldays I joined a group of young traders in Hamburg in the early 1980’s. Through a business partner we made contacts in the gold trade and in Liberia, West Africa. As the civil war broke out there at the end of the eighties, I lost my African business contacts, they disappeared out of sight.

In the nineties I worked as a freelance computer trainer and network installator. In 1994 I founded an internet company. It was one of the first in Germany.

At the end of 1999, an old business friend from West Africa showed up again and asked me for help in building a gold mine on his family land.

Until 2007 I was prospecting for gold and diamonds in the West African bush with my own license and concession until this became impossible due to the political situation. Since then I have been working internationally as an independent prospector, writer and photographer and have made it my mission to bring hidden treasures to light. Today I live a location independent, mobile lifestyle.”